Warning: Be Careful What You Think, Say and Do until February 2022 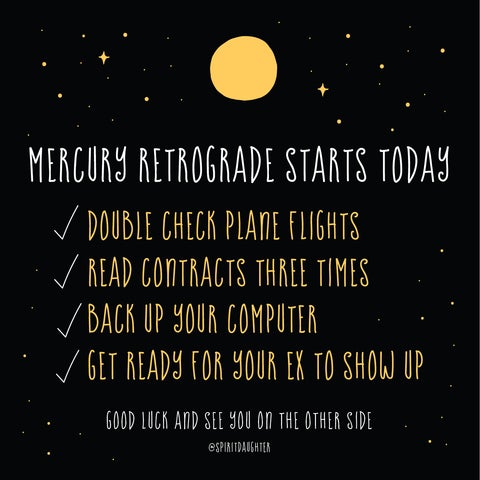 Suffering from a bad case of saying the wrong thing at the worst time? There’s an explanation in the stars, blame it on the current Mercury Retrograde.

The first Mercury Retrograde of 2022 begins today Friday, January 14, in the sign of Aquarius. Then, the planet moves into Capricorn on Tuesday, January 25. When the swift-moving Mercury cruises backwards, we can expect.

While the first Mercury retrograde starts today, its shadow period began on Wednesday, December 29, 2021. During this ‘shadow’ time, we began to feel the effects of retrograde, although they are less intense than when things go full swing, from today. OMG No!.

On top of that, planet VENUS is still retrograde during this time, as it has been since Sunday, December 19. Venus rules love (our heart), beauty, and abundance, while it is in retrograde, it can be. Keep coming back to your heart space rather than being in your head to deal with it, have compassion for yourself and others during this time.

With Mercury and Venus in retrograde together, it’s not an ideal time to tackle significant relationship conversations. Because Venus also rules money, this may also be a frustrating time to

Thankfully, the Venus goes direct on Saturday, January 29. Shortly after, the first Mercury retrograde ends on Thursday, February 3, with a sigh of relief. If you can, hold off on having potentially sensitive conversations surrounding money, sex, and love until both planets end their backward dance. To be sure to be sure, make it February 5th!

While communication will become easier on this date, the shadow period (yes, there’s one on both ends of every retrograde) lingers until Wednesday, February 23. It should be fine to sign important documents again during both shadow periods, but make sure to triple-check the fine print.

What exactly is Mercury retrograde?

As communication is a massive part of our daily lives, frustrations are to be expected when Mercury the messenger planet goes reverse, yes it can be annoying and cause some mishaps, but they’re not the end of the world, they are actually helping us. You’ve been through it before plenty of times and will get through it this year, too. Dates for Mercury retrograde in 2022?